“The kiss of the sun for pardon,
The song of the birds for mirth,
One is nearer God’s heart in a garden
Than anywhere else on earth.” – Dorothy Frances Gurney

Nestled in the beautiful rolling hills in the community of Fallbrook, Promacks Farm was started by David and Linda Promack in the late 1980s. Both David and Linda grew up in the greater Los Angeles area, and after they married in 1978, purchased a 5 acre parcel in northern San Diego County in Fallbrook, Ca., in 1979. After having 2 children, the Promacks relocated permanently to Fallbrook.

David was a pharmacist by trade, but his passion was farming. Over the years, the Promacks have planted over 100 blood orange, peach, apricot, plum, lemon, orange, and grapefruit trees. Along with the fruit tree orchard, the Promacks planted a large, working garden full of corn, lettuce, tomatoes, potatoes, yams, peppers, squash, zucchini, berries, pumpkins, melons, carrots, and much more.

Even with a growing family, the Promacks found that they had extra produce during the spring and summer harvesting months, and wanted a way to share the bounty of their land with their neighbors and with friends in the Fallbrook community. The “Promack Fruit Stand” opened on the front porch of The Farm in 1992, and has been open for a few weeks every summer since. In fact, people in the community start looking each June for the famous “Promacks Peaches” signs that pop up.

…The kiss of the sun for pardon,
The song of the birds for mirth,
One is nearer God’s heart in a garden
Than anywhere else on earth… 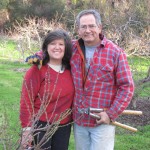